Bathrooms and kitchens sell homes, says West Palm Beach, Fla.-based interior designer Gil Walsh, and the design choices made in them can make or break a home sale. From a sales standpoint, they’re arguably the two most important rooms of the home.

Kitchen requirements tend to be clear-cut — homeowners need a stove, counter, sink, and cabinets — and its location at the heart of the home opens up a range of design possibilities. When it comes to bathroom design, however, homeowners, builders, and designers are often faced with a tough choice — shower or tub? Both master and secondary baths come with spatial limitations, and it sometimes comes down to one or the other.

BUILDER talked to builders and designers on both sides of the aisle to see if showers or tubs are more in demand these days. Here’s what they had to say on the great bathroom debate:

Team Bathtub
Tony Crasi of The Crasi Company, based in Cuyahoga Falls, Ohio, built his home with a state-of-the-art whirlpool tub in the master bath. “I used it maybe five times in 12 years,” he confesses. Crasi cautions his customers that they may not end up using their luxury bathtubs either, but that isn’t slowing their requests for whirlpools, garden tubs, and more.

END_OF_DOCUMENT_TOKEN_TO_BE_REPLACED 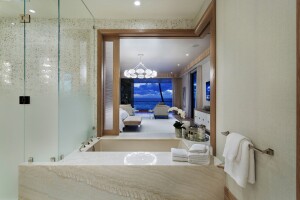 Homeowners are busier than ever and for some clients, stress levels are through the roof, he explains. At the end of the day, they want “somewhere to soak, somewhere to relax, somewhere to go hang out and hide.” Whether people actually have the time to use their tub doesn’t seem to be affecting the trend, according to Crasi, and might be entirely irrelevant, says Marc Thee of Winter Park, Fla.-based Marc-Michaels Interior Design.

“People are living younger than they used to,” Thee explains, “so whether or not they’ll use it, a beautiful vessel tub or soaking tub is sexy. It makes people feel sexy, and it showcases either a peek-a-boo or full visual from the bedroom. It reads this fantasy, wonderful, intimate moment that people enjoy whether they ever get in it or not.”

While some people love the experience of unwinding with a nice, warm bath, other designers agreed with Thee that most people who opt for a tub are more interested in its contribution to the overall look of the room. Bathtubs, especially freestanding tubs, can serve as a “sculptural centerpiece to the bathroom,” Walsh explains, and lately, they “are really being given an opportunity to stand out in the form of art.”

The Roman bathtub lined by columns and candles is long gone — and good riddance, says Thee. It’s been replaced by freestanding vessel tubs in elegant spoon or sugar bowl molds that not only conform to the bather, but contribute a refined, even architectural, look.

Team Shower
Can a shower offer the same level of luxury as a beautiful bathtub? Leigh Spicher of Roswell, Ga.-based Ashton Woods thinks so. “We’re not totally abandoning the luxury that comes with what once was the tub with the candles and everything,” she jokes, because showers are larger and more spa-like than ever, with rainheads, body sprays, benches, and more. “People are still wanting personal luxury in their bath, but now it’s not necessarily in the form of a tub.”

END_OF_DOCUMENT_TOKEN_TO_BE_REPLACED

The consensus among Ashton Woods’ design studio managers is that tubs are overwhelmingly being replaced by large showers in the master, she explains. “I myself had a bit of a visceral reaction to that — No, don’t take the tub!” But even the avidly pro-bathtub designers admit that for some spaces, showers just make more sense.

On top of this, there’s a growing number of buyers with a “less is more” mentality, according to Lauren Jordan of Gaithersburg, Md.-based Builders Design. “Millennials and Gen Xers are into functionality,” she explains, and if they’re not going to use the tub frequently, they’re going to eliminate it altogether. “In a lot of condominiums we do for single people or people without kids, they’re willing to sacrifice the tub,” says Christopher Grubb from Beverly Hills, Calif.-based Arch-Interiors Design Group. “It’s just not their lifestyle.”

The speed and convenience of showers is tough to beat, Amy Miller from Greenwood Village, Colo.-based Lita Dirks & Co. adds. “These days, people just don’t have time to wait for the tub to fill up and then spend the time to sit and soak for 20 minutes.” The tub is phasing out just like the formal living room did, she says, when homeowners realized they could make better use of the space.

“The shower is winning,” Janet Hobbs of Bee Cave, Texas-based Hobbs’ Ink Custom Home Design declares. “I think it would be safe to say that maybe 80 percent of my clients want the shower and they’re just putting the tub in because they think they have to.” And sometimes they do have to, as a few designers on Team Shower admit. Having a tub somewhere in the home, often in the secondary bathroom, is often a priority for homeowners with young children and pets.

A Happy Medium
Is the great bathroom debate necessarily a polarized one? Many designers are offering a happy medium, which Thee calls a “wet environment” — a tub within a shower that seems to meet the needs of most home buyers.

END_OF_DOCUMENT_TOKEN_TO_BE_REPLACED 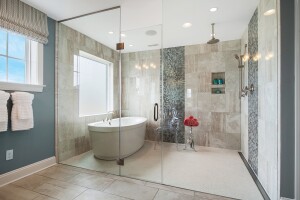 Jordan loves the “progressive” nature of the shower-tub combination because it meets the needs of older millennials like herself, who enjoy the practicality of a shower but are also starting families. Bathtime is playtime for young kids, says Thee, especially in a space that can contain epic handheld-showerhead water fights. At the same time, these environments are almost always zero-threshold, eliminating the traditional shower curb and accessibility challenges along with it.

The curbless look is appealing to all age ranges, Grubb adds. “For the older person who is [downsizing] and moving from the suburbs to the city, there’s an attraction to how sexy it is, because if they were in a home a long time, it would have had the old-school dam. For millennials, it feels more hip and it doesn’t necessarily feel like the house they grew up in.”

What Comes Next?
Trends are known to come in cycles, but American households are heading into new terrain, moving away from the traditional family household structure. Curbed showers don’t meet the needs of a rapidly growing boomer population, and tubs don’t offer the functionality that many Gen Xers and millennials prefer. While a curbless combination is an innovative solution that can meet Team Bathtub and Team Shower halfway, bathroom design must continue to evolve to offer every homeowner, of any age, the type of luxury they’re after.

Miller and Walsh think that accessibility and ADA compliance will drive the trends going forward. Thee would love to see a walk-in tub that’s a little more attractive than those on the market today, so that bath-loving boomers don’t have to compromise on style. And several designers are keeping their eyes peeled for bathroom designs that are more health- and eco-conscious, perhaps including an exercise area, aromatherapy, and more resourceful shower fixtures. Home buyers will have to wait and see what comes next.

Kathleen Brown is an editorial intern for BUILDER and Multifamily Executive magazines.